When I was in Greece last summer I experimented with a technique to learn languages described by Dominic O’Brien in some of his books. Here is how the technique works:

Dominic took the linkword method, where a foreign word can be associated with a word or image in English. (Edit: this technique is also mentioned in Harry Lorayne’s books.) Then he improved the concept by adding the idea of organizing words by placing the images in memory palace locations according to the language’s grammar. Here’s an example of how I experimented with the technique in Greek:

First I took my hometown and split it into several sections. The book on learning Greek that I was using split verbs into three conjugation groups. I placed images for verbs in three separate parks depending on which verb group they were in. 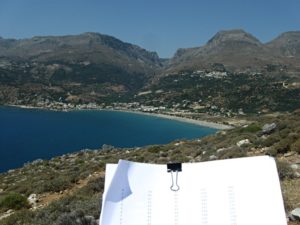 “To know” in Modern Greek is γνωρίζω (”gnorizo”). I put an image of a gnome eating rice on a book in the first park. The book reminds me of “know”. The gnome is also holding two arrows and crossing them in front of him like an “X”, because the other word for “to know” is ξέρω (ksero) which reminds me of “X-arrow”.

The verb, περιμένω (perimeno), means “to wait” and belongs to the first verb group. “Per-i-men” sounds like “pear eat men,” so I pictured a giant man-eating pear waiting for the bus at the first park.

The locations of the verbs remind me how to conjugate them.

Nouns can be placed in different sections of the town depending on whether they are masculine, feminine, or neuter.

I put the images for adjectives in a different park.

I didn’t learn Greek, but just experimented with the technique a little bit. Since then, I’ve been wanting to apply this technique to fully learning a language. I was going to pick a language that I didn’t have any knowledge of so that I could test how effective the technique is when starting from scratch. But certain circumstances have inspired me to learn as much Brazilian Portuguese as possible in the next month. :)

I’m not starting from scratch. I once took a class in Brazilian Portuguese for a few months, and I also listened to some language CDs. I studied Brazilian guitar a long time ago and used to know the lyrics to a lot of bossa nova and choro songs. I don’t have much vocabulary and couldn’t put much of a sentence together though.

Tomorrow I will begin this experiment and post updates here in the blog.

Your language learning efforts ought to be directed to learning English.

@Elegant Duke: why do you say that? English is my native language.