Yesterday, I went to the de Young Museum in San Francisco to collect mnemonic images for my memory system.

I’ve struggled for many months to fill out all the images needed for my main memory system. I’ve been through many books and Wikipedia, but still have about 1000 images to go. In the meantime I’m using a simpler 2-digit/single-card system.

Since museums are storehouses of the most interesting objects and art in a society, I figured that the museum would have many ideas for mnemonic images. I also found some objects at the museum to help make existing images more vivid.

For example, I use the image “tusk” for the number 190. I’ve been visualizing just a plain elephant tusk. At the museum I found a few walrus tusk cribbage boards with elaborate carvings. I think that one of these objects will make a much more dynamic image than a plain tusk, because “playing cribbage” and “carving a tusk” are good actions:

(Sorry about the image quality. The lighting was low and the museum doesn’t allow flash photography.)

Instead of a simple glass canning jar (4♠ 4♥), my image for jar is going to be replaced by one of these: I gravitated towards things that captured my attention visually. Here is a kind of shapeshifting bear with a mask that I think will make a memorable, interactive image. Here is a striking image of a feline creature that walks upright, wears feathers, and shoots flames out of its hands: I’m guessing that, by this point, some people are going to recommend that I use images that are familiar to me–but I’ve already used those up. :)

I don’t watch TV or movies and don’t have a huge mental library of celebrities to choose from. Also, I don’t have any interest in learning about celebrities. It would take me just as much effort to learn celebrities as to do what I’m doing now, and I wouldn’t enjoy it.

Here are a few more: 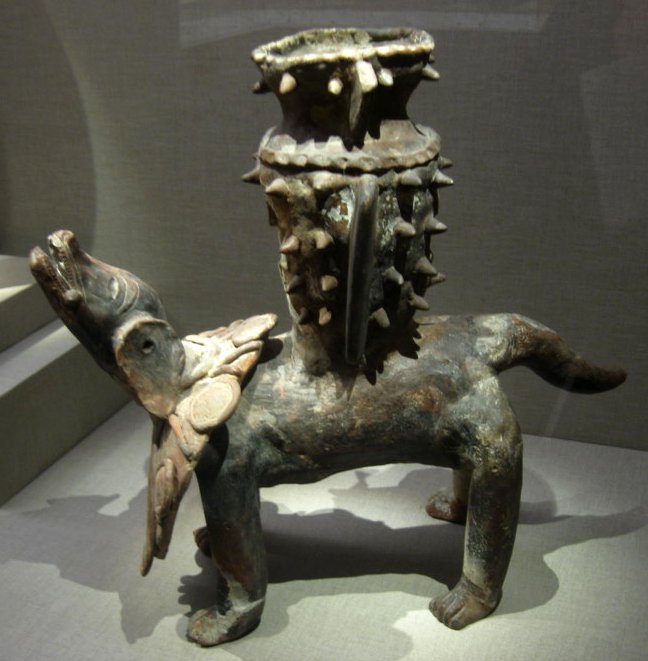 I also took ideas for images from the paintings in the special collection.

From this painting, I’m going to use the snake charmer, a roseate spoonbill (though I’m not sure the bird in the painting is a spoonbill), and possibly the plant with gold-edged leaves: This image is a bit darker, but it’s memorable: A gaunt fisherman in a boat. For the image, his wife and baby will be in the boat too: Eugène Boch, as painted by Van Gogh, has a memorable face: As I was looking at the Van Gogh paintings, I started wondering if a series of paintings could be used as a memory journey. For example, to memorize facts about Van Gogh’s life, mnemonic images could be placed among an ordered series of his paintings of landscapes, rooms, and cafes.

Van Gogh also painted many other striking portraits that could be used as characters for images.

I took hundreds of photos at the museum, and this blog post is just a small sampling of what I’m working on.

For all numbers in the thousands, I'll have 3 images (thousand group, hundred group, standard peg).

For example: for the 100 group I use Danny Devito as the Penguin from the Batman movie. So that any number from 100-199 will have and image of the Penguin. The Penguin will tell me that the number I'm trying to recall will have the digit 1 in the hundreds column. For the last 2 digits I use a standard peg image. Therefore, 122 = Penguin/Mother Teresa (22 = nun) (which is then associated with whatever you want to remember). 162 = Penguin/chain (62 = chain)

The beauty of this system is that it makes no difference what story you create. You can NEVER mix up the numbers they represent, since each image stands for ONLY ONE place (thousands column, hundreds column, tens/ones column). This is especially effective when you want to remember phone numbers (or any kind of number). When you recall the images and want to translate them back into the number, each image can represent ONLY ONE place in the line. When you see King Kong (or whoever else you use for the 300 group) you AUTOMATICALLY KNOW that the 3 belongs in the hundreds column of the number you're trying to recall. And anytime you see your standard peg images, you KNOW that they belong in the last two places (ones and tens columns).

For phone numbers, I use only one image all the time to remember that the number I’m trying to recall is the area code and another image to remember the exchange. Example: for the area code 312, I make up the standard combination that I would use for 312 = King Kong (300)/Tin man (12 = t,n). Then I combine these two with Green Lantern, so that when I recall the imagery/story and see Green Lantern with King Kong and the Tin Man, I know this number MUST BE THE AREA CODE because the only time I use Green Lantern is to remind me that the number is an area code. For the exchange (the 3 numbers following the area code) I use another image all the time, so that I always know which group of 3 is the area code and which is the exchange.

The little story or general image you create doesn't have to be linear. You can put the Tin Man first, King Kong second, and Green Lantern third. When you “translate” or “reconstitute” the imagery back into a number, you ALWAYS put Tin Man at the end (the last 2 digits) because the Tin Man is ALWAYS your standard peg image for the last 2 digits of ANY number. You MUST put a 3 in front of the 12 because King Kong is ALWAYS your standard image for the three hundred group (any number from 300-399). In other words, you MUST end up with 312 all the time, no matter where in the story you place your images. And when you see King Kong and the Tin Man associated with Green Lantern, you KNOW that 312 MUST BE the area code.

Using images in this way means that you NEVER have to remember a word for each number or a separate image for ALL numbers. You don't have to translate the number into the phonetic alphabet, and then try to remember which word you used. Each place in the number (ones, tens, hundreds, thousands) will automatically conjure up the standard image you use for that place.